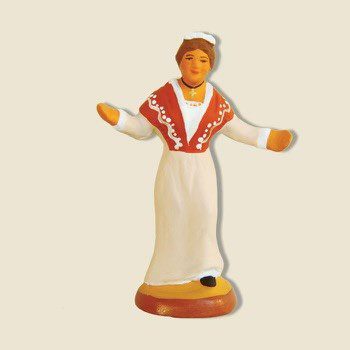 Vermilionville is proud to have Kate Ferry return for another Les Mains Guidées  Saturday, December 17, this time, making Les Santons de Provence, traditional clay figurines that the Provençal make to place in the Christmas Crèche.

Kate Ferry is a well-known area artist, designer and illustrator who has made a career of doing award-winning work for Louisiana agencies and clients, while also producing her own works including murals, paintings and other artworks.

The crib is composed of figures called “santons” which formed French villages some centuries ago, the shepherd, the drummer, the village idiot and many others. The first Christmas crib known in France was set up in 1775 in Marseille. Nowadays they are set up around the end of November, or beginning of December and dismantled after Epiphany when the Three Kings join the other figures. The origin of the word “santon” is the Provencal noun “santoun” which means little saint. Santons are traditionally hand made of clay and painted by artisans, and you can have that same experience at our workshop. We will be making sanotns with Sculpey, which will then be fired and painted, and placed in the crèche.

Some of the figures we will be making: The Newborn Jesus, Virgin Mary, Father Joseph, donkey, sheep, Three Kings, angels, along with some more familiar Vermilionville figures including The Seamstress/Weaver, The Tribal Chief, The Woodcarver, The Trapper, The Cook, The Breadmaker, The Blacksmith, The Musicians (Fiddler, Accordion Player, Rubboard Player), The Basketmaker, The Quiltmaker, The Storyteller, The Boatbuilder, and more. Each workshop attendee can expect to make and paint at least two or three figurines, to take home or to leave as part of the Vermilionville crèche over the holidays.