Our Les Vues Film Series is held on the last Monday of each month. The event is curated by filmmakers and enthusiasts, statewide. Films range from documentaries to animations focusing on various aspects of culture. Following the screening, there is a discussion between the audience and the curator.

The November Les Vues Film is the 2013 film “Can’t Stop the Water”, by Rebecca and Jason Ferris. The discussion that follows will be with Chief Albert Naquin and other members of the Ilse de Jean Charles Band of Biloxi-Chitimacha-Choctaw. 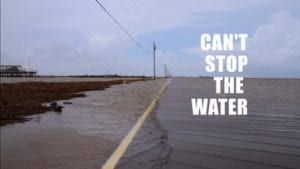 Film Summary: For 170 years, a Native American community has occupied Isle de Jean Charles, a tiny island deep in the bayous of Louisiana. They have fished, hunted, and lived off the land. Now the land that has sustained them for generations is vanishing before their eyes. Coastal erosion, sea level rise, and increasing storms are overwhelming the island. Over the last fifty years, Isle de Jean Charles has been gradually shrinking, and it is now almost gone. For these Biloxi-Chitimacha-Choctaw Indians, their land is more than simply a place to live. It is the epicenter of their people and traditions. They now must prepare to say goodbye to the place, where, for eight generations, their ancestors cultivated a unique part of Louisiana culture.

About the filmmakers: Award-winning filmmakers Rebecca Marshall Ferris, Jason Ferris, and Kathleen Ledet began documenting life on Isle de Jean Charles in January 2010, and spent three years immersed in the lives and daily dramas that call this place home. The result is an intimate portrait of a community persevering in the face of an uncertain future. – http://www.cantstopthewater.com/

All suggested guidelines will be followed in order to keep our visitors and staff healthy. Please wear a mask and practice social distancing.

Les Vues is a FREE event but a suggested donation of $5 is appreciated to help with screening costs.