Determined to Rise: The Woman’s Suffrage Movement in Louisiana EXHIBIT 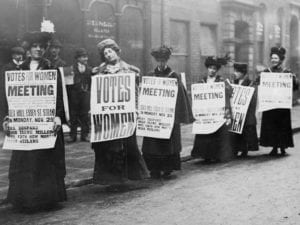 A traveling exhibit, Determined to Rise: The Woman’s Suffrage Movement in Louisiana, celebrates the challenges and triumphs of the women’s suffrage movement in Louisiana in celebration of the 100th anniversary of ratification of the 19th Amendment giving women the right to vote. Developed by the Centennial Women’s Suffrage Project (CWSP) at Southeastern Louisiana University and with grant support from the Louisiana Endowment for the Humanities (LEH) Rebirth grant program the exhibit consists of eight panels depicting photos of Louisiana suffragists, a timeline of significant events, the movement from the African-American woman’s perspective, laws that have changed since women gained the vote, and Louisiana women who have made their mark on history.