Books along the Bayou

An event every 2 weeks that begins at 6:00 pm on Thursday, repeating indefinitely 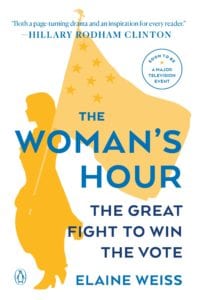 Books on the Bayou (Virtual)

The Woman’s Hour: The Great Fight to Win the Vote

Register by September 3rd for a chance to win a free copy of the hardback book. Drawing will take place on September 4rd

In the summer of 1920, one of the pivotal political battles in United States history unfolded in Nashville, Tennessee, as the Nineteenth Amendment, granting women the right to vote, was on the cusp of victory—or, possibly, defeat. The enfranchisement of half of the citizens of the nation was at stake, and it all came down to Tennessee. The Woman’s Hour details the dramatic climax of the suffragists’ seven-decade struggle for equal citizenship, bringing into focus the powerful forces arrayed against their cause. Employing all the color and drama of a great political novel, Elaine Weiss shows how the core themes of American history and current-day affairs—race, class, money, gender, states’ rights, power, and democracy—all came into play in Nashville, Tennessee, as the Nineteenth Amendment was on the cusp of being ratified. Rich with vivid characters, including appearances by Susan B. Anthony, Woodrow Wilson, Warren Harding, Frederick Douglass, and Eleanor Roosevelt, The Woman’s Hour reveals what it took for activists to win this crucial battle and how close they came to losing. The Woman’s Hour is more than just a vivid work of history, it is an inspiration for everyone who continues the fight for justice and equal rights today.

Where you can get the book: